Interview with Giovanni Visone from Intersos

Last month AlfaBeta had the pleasure of interviewing Giovanni Visone from the NGO Intersos (one of our clients). In the interview we briefly discuss what Intersos does as an organization and how they have been handling the immigration crisis in regards to communication and the public sphere. The interview is featured below, enjoy:

First could you tell us a bit about Intersos and what the organization does?

Intersos is the moment of action, Italian NGO (Non – governmental organization) that deals with manmade emergencies and natural disasters.

How long have you been working here?

I’ve been working at Intersos for almost three years.

What has been the most rewarding aspect of working at Intersos? 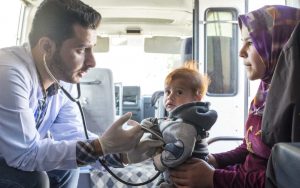 “Intersos helping out in Iraq” – Picture provided by organization

Direct contact with the field; So traveling, exploring, getting to know our missions. Getting in touch with the people we assist, especially, getting to know their stories. Most of our work can be technical in front of the computer and when you go out into the field you realize what you’re actually doing and why you’re doing it.

Do you believe that in Italy people view activism positively?

No. Italy is very different from the U.S. because there is not a strong tradition of activism, there is a tradition of religious volunteering. That’s why it is important to make people understand that the work we are doing is not for free, we are professionals. Humanitarian NGO’s need to be professional in order to get to the level of really helping people and making an impact. Italy is a country that leans more towards religious volunteering than activism. Another thing, usually the organization of international humanitarian NGO’s have always been very tight, during the last year there has been a political movement against NGO’s, having to do with the migration issue. That has changed the viewpoint a little bit more. Of course we have to try and keep doing our job without being pushed into a political polarization. We try to express that we are partial, independent and neutral.

In America, politically, activism can sometimes come with a negative connotation (especially if it is seen as very liberal) like Italy but culturally it is more accepted; Do you believe that there is a difference in the way activism is looked at in Italy in regards to culture vs politics or do you think it’s the same? 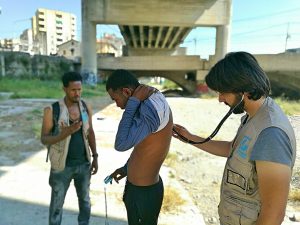 No, there’s not a difference. It really depends on your organization though, if you’re work is politically sensitive, then of course you create a polarization; for example, nuclear weapons or other environmental issues, in our case migration. However, if you’re building schools in Africa, usually there is not a real polarization. No politician will attack you, especially if you work under a religious umbrella. It depends on what you’re doing, and where you are pushing your job to. Sometimes if you are an activist for human rights you can get in conflict with political parties. Recently we denounced the violations made by French and Swiss police in the Northern border of Italy, with the legal push backs of minors (immigrants). Of course, we created a polarization in those countries. Which was very interesting because part of those countries stood with us, some French people started to condemn the French police for legal pushbacks, but it is not so much the same in Italy.

Do you think social media has a large impact on Intersos in terms of visibility and participation whether it be donations or volunteer work?

I think in the last few years, social media has had a huge impact on awareness and information. This form of informal media is almost taking the place of the traditional media. The impact on Italy as far as donation is increasing, which social media has played a part in, but still not very high. On the other hand, you always have to connect what you do on social media with grass rooting, street by street and direct contact in order for it to work.

How often would you say that you interact on social media? 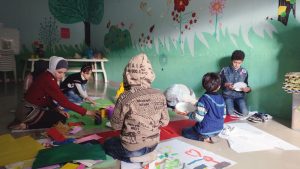 Would you consider starting a social media campaign for the organization, or partnering with another campaign

You really have to be in the heart of the public debate. It’s not so important how much money is put into a campaign it’s about how the public sees you, and then becomes viral. It may happen, but with the subjects we are dealing with now, probably not. We do work on more traditional social media campaigns like advertising though.

How has it been different working at Intersos since the migration issue has arisen?

Well, I arrived when the issues had already started. The first thing, before we get into the political debate, we had to make the decision to start working in Italy. Which was strange because usually we work in situations where the public or the state, or host community is unable to provide the help that people need. I am coming back from Nigeria next year, where every hospital is destroyed, in Italy it is not like that. If you go to a hospital in Italy you are for the most part fine, things are even free. So the problem is that there is a political gap in the type of aid that this country was able to do, and as a NGO we could feel that gap. We are not running any service that is paid or could be run by the state. We do not run official centers, that are run by the state, because it is not a humanitarian job. It’s a social service, but not a humanitarian job. However, we created a primary health center in Calabria, that was our first project. We realized that the refugee population living in that area, one of the poorest in the country, was not able to enter into the national health system because they did not have the right papers. There was no medical aid in the health centers. We started that model five years ago, and now that model was in cooperated into the national system in that region, we are leaving as a success. Now we started a program to fill a gap, and now it has been filled. The same with unaccompanied minors, the problem is not that they cannot be helped in Italy. The problem is that they do not want to seek asylum in Italy, so they become invisible and then lose all protection from the state and that’s why we are helping them.

What would be one of the worst interactions that you or the organization has had in regards to communicating with the public sphere? 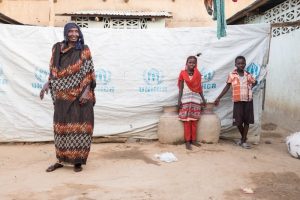 There are a lot of toxic narratives and aiders on social media. On one hand the information is being displayed horizontally which is very interesting, because you can get into that newsfeed easily; on the other hand, it is very dangerous because there is no control of what other people are saying. For example: there was a toxic campaign on Facebook saying that pictures circling of migrant children were fake.  However, no one double checks this type of fake news. This is the hardest thing that we have to face. There is nothing specifically directed against us though.

Lastly what is your role in the Mediterranean in regards to the migrant ships and what is Intersos’ opinion about the ethics of getting involved? Additionally, from your experience, what would be a good communication strategy towards the general public?

Our role is quite protected, because we work with the Italian coastal guards. We collaborate with UNICEF and provide first aid, and psychological support to unaccompanied minors and women. We do not directly do search and rescue, that’s just the coastal guard. Of course now there is a very interesting issue, because the Italian coastal guard rescued them from the boat at sea, a few days ago. Coming up with a communication strategy is very difficult, because NGO’s were really surprised that we have suffered so much from this political attack last year. We what we can do is continue to be visible, hopefully to stop children dying at sea, which is something we now see almost every day. On the other hand, we have to work from a smart legal point of view on the contradictions of this kind of policy that the Italian government is trying to implement. By contradictions, I mean to which extent can the Italian government make the Italian coastal guard not perform a search and rescue; It’s difficult, because it’s not possible to just write rhetorical declarations about human rights, you would obviously need research and hard work, but I feel that it should be rewarding. We just need legal experts, more and more. The last thing is that, especially in Italy you really need to do a lot of grass rooting. I talked about the importance of social media, but posting a quote or declaration does not help as much as connecting personally with the Italian society. 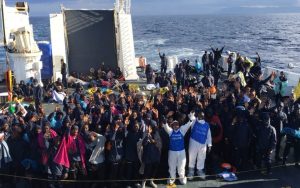 “On the boat in the mediterranean with the migrants seeking refuge.” – picture provided by organization

If you want to learn more about Intersos, you can check out their website: here.